Team leaders can invite users to join the system and automatically invite them into their team.

Big Team Challenge's walking and exercise challenges are based around friends, family and colleagues getting into teams and competing with one another. For this reason we've tried to build in as many ways as possible to get everyone on the system and organised into teams.

Inviting users as the challenge organiser

As the organiser you have the ability to create teams for your users and hand select who goes in which team. This is great if you are wanting to keep teams organised and level, or perhaps if you are running a charity fundraiser and only wish to allow people into the system once they have contributed.

You can read more about administering teams here.

Inviting users as a participant

If you are allowing your participants more freedom, when they sign up to join the challenge, the first thing they are asked to do is join an existing team or create their own. If they create their own they are automatically designated as the team leader and can invite users via a simple invite form, which automatically sends out an email to the invitee.

You can read more about inviting people to your team here.

Invite users as the challenge organiser

Use the admin system to create teams and invite users.

Invite users as a participant

Users can create teams and invite other users to join them.

How do I invite people to join my team?

If you are the team creator, you can invite others to join you by sending an invite on the website or within the app. Go to the 'My Team' section and use the 'invite member' link to send a new invite. You’ll need to know the email address of the person you’re wishing to invite.

Can I leave a team if I want to join another team or create my own?

If you wish to leave the team but are unable to for either of these reasons, please get in touch.

Explore some of our other challenge features

Add your logo to the website and app to help increase brand visibility.

Easy access for all your participants using our web, iOS and Android versions of your challenge.

Capture extra information from your registrants, such as payroll number or branch location.

Choose how long your step count challenge lasts, what route you walk and who can take part.

Send regular updates to participants via email and push notifications from your private admin page. 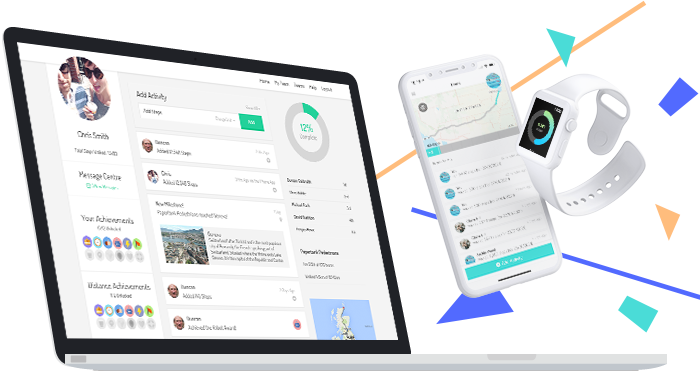 Native apps for iPhone and Android give users a fun and easy way to interact with the step challenge.

Team leaders can invite users to join the system and automatically invite them into their team.

From your private admin page you will be able to download CSV reports with valuable user data.

Choose to lock your challenge so that only users with a passcode can register.

Sometimes it's just a little easier to have a human talk you through pricing and all the ways you can customise your own step challenge.

Thank you! Your submission has been received!
Oops! Something went wrong while submitting the form.