108
67
158081
8
The Italian Riviera: Quite simply one of the most beautiful, colourful and photographed coastlines in the world. Simply stunning!

141
88
206777
8
Enjoy a picturesque walk around Lake Garda, the largest of theItalian Lakes, stretching between the Alps and the Dolomites. Visit avariety of lovely towns nestling on the shores of this beautiful lake. It's enough to make you want to look out your passport.

154
96
224787
6
The Bay of Naples and the rugged Amalfi Coast: An area of stunning beauty packed with history and culture along one of Italy’s most beautiful stretches of coastline. A place to enjoy.

237
148
346895
8
Istria: A sun-kissed, heart-shaped peninsula stretching into the northern Adriatic Sea. Shared by three countries: Croatia, Slovenia, and Italy. Explore some the highlights of Istria which help draw millions of visitors to this beautiful and historic area every year.

450
280
656585
10
Italian Delights: Italy; what a beautiful country! Home to more UNESCO World Heritage Sites than any other country. Enjoy ten stunning, historic locations on this walk around northeast Italy ending in one of the world’s most iconic cities.

572
356
835468
8
European Peace Walk: A unique and inspirational walk, founded in 2014. Travel through four beautiful countries from one of the greatest cities on the continent to the shores of the Mediterranean.

589
366
859951
10
Italy - Coast to Coast: Cross this wonderful country from the Adriatic Sea to the Ligurian Sea taking in some of the best of Italy. Another treasure trove of a trail.

653
406
952850
8
Sicily: The largest island in the Mediterranean Sea; an autonomous region of Italy with its own rich and unique culture, historic cities and home to seven UNESCO World Heritage Sites. A stunning, must-visit destination.

889
553
1296787
9
The Adriatic: Simply one of the most beautiful coastlines in the world sprinkled with picturesque and historic towns and cities which attract millions of visitors each year. Why don’t you join them and sample the delights of this stunning walk.

1160
721
1691921
9
Italy: A classy, classical, cultured country packed with history, glorious countryside, majestic cities and home to the greatest number of UNESCO World Heritage Sites in the world. You’ll love it!

1270
789
1851920
12
Via Imperii: Travel one of the most important imperial routes of the ancient Holy Roman Empire, north through Europe all the way from the shores of the Adriatic Sea to the Baltic. A bit of a classic.

1415
879
2063811
11
Paris to Rome: What could be better than strolling down the Champs-Élysées in the heart of the beautiful capital city of France before heading off on your travels? Your destination - the Colosseum and the other must-see sights of the historic city of Rome, capital of Italy which lay at the centre of one of the great empires of the ancient world.

1420
883
2071777
8
Barcelona to Rome: A classic walk back through the centuries from the creative genius of Antoni Gaudí in Barcelona to the might and majesty of ancient Rome.

1423
885
2076105
10
Carcassone to Zagreb: Travel east through four beautiful countries taking in some of the continent’s most popular and fascinating cities on a route inspired by European long-distance footpath, E7.

1463
909
2133737
11
Rugen to Venice: Inspired by one of Europe’s long-distance paths. Travel through six countries, visiting fascinating cities on your way south from the shores of the Baltic Sea to the Adriatic. Another walk to savour.

1509
938
2201138
12
Europe: Coast to Coast: Walk south through Europe all the way from the Baltic Sea in the north to the shores of the Mediterranean on a route peppered with iconic towns and world-renowned, historic cities.

1541
958
2247295
11
Saint Malo to Venice: Inspired by the E5, European Long-Distance Path, this enticing walk takes you through four beautiful countries all the way from the shores of the English Challenge to the most famous lagoon on the Adriatic Sea.

1700
1057
2479361
11
Canterbury to Rome: A nod to the ancient Via Francigena pilgrim route, awarded European Cultural Route status to promote the continent’s shared culture and history. Walk through four European countries from a historic English cathedral city to one of the world’s most popular tourist destinations. Enjoy.

1708
1061
2490527
10
Regions of Italy – Part 2: Explore another ten of Italy’s twenty diverse regions featuring some of the world’s most visited destinations. Another lovely walk with oodles of stunning scenery, history and heritage.

1815
1128
2647006
7
London to Rome: A European treasure trove of milestones packed with thousands of years of history and culture in some of the most best known and best loved destinations in the world.

2044
1270
2980871
9
Genoa to Gibraltar: A journey along the north-west coast of the Mediterranean Sea taking in some of southern Europe's most historic, best loved and vibrant cities.

2136
1328
3115917
5
Proving that small is beautiful; visit some of Europe's smallest, beautiful and varied countries, each packed with history and culture. You'll be amazed!

2425
1507
3536224
12
Edge of Empire Challenge: Follow in the footsteps of centurions and legionaries on this journey across the ancient Roman Empire from its magnificent capital, Rome, to the iconic Hadrian's Wall which stood on the frontier between Roman Britannia and unconquered Caledonia to the north. Created to mark the 1,900th anniversary of the construction of Hadrian’s Wall.

2447
1521
3569375
20
Athens to Rome: A trail between two iconic cities. Travel through a string of wonderful places as you cross six European countries on this journey between these famous cities which lay at the centre of two of the world’s great ancient civilisations.

2574
1600
3754256
24
Glasgow to Rome: From Scotland’s largest city to the capital of Italy. From the Clyde to the Tiber. Through five countries taking in a string of smashing locations along the way to help keep a spring in your step.

4749
2951
6925895
16
Looking for a challenge? Well this might be it - an epic walk through nine countries taking you across Europe from east to west; all the way from the boundary between Europe and Asia, to the tip of northwest Spain and the Atlantic Ocean.

5685
3533
8290277
9
Explore some of Europe's momentous history and rich culture in a walk that takes in 9 iconic cities which helped shaped this diverse continent.

14739
9158
21491920
36
A European Adventure: An amazing continent of contrasts. We love it! Take in some of Europe’s wonderfully varied cities on this walk to remember. It’s a long one but worth it. Round up your family, friends or work colleagues and have fun.

14942
9285
21787808
36
Walk the Med: The Mediterranean Sea. The most famous sea in the world. A sea that has witnessed the emergence of great and ancient civilisations, facilitated trade and feed millions over thousands of years.
No items found. 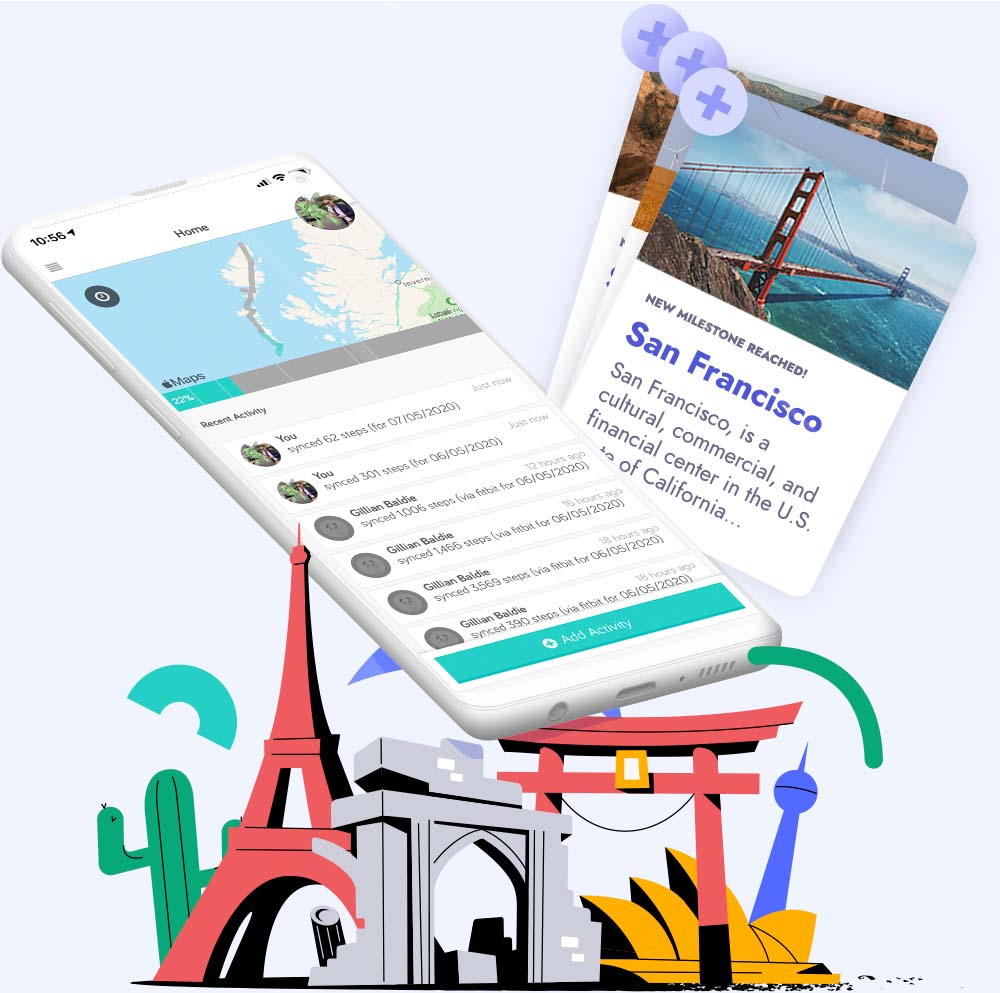 Get in touch with us today to talk to us about building your own custom route with your own milestones, images and text.

Use your route to engage your users about your company history, charitable cause or highlight the incredible work of your teams.

Get in touch
Get your teams moving!

Wanting to run your own steps challenge?

Hopefully some of the exciting routes we have on offer have enticed you enough to want to create your own exercise challenge.

The first step should be to work out how many participants you are likely to get involved and head over to our pricing page to check out what sort of budget you should set yourself. Once you've got your instant quote you can immediately sign up to create your Challenge Creator account for free. You will only be required to pay for your step challenge once you have set everything up and are ready to go live and showcase it to the world!

Our extensive FAQ section may help answer some questions you might have about features, the admin area, how participants track steps and other commonly asked questions.

And of course, if you have any questions at all you should never hesitate to get in touch.‍

Sometimes it's just a little easier to have a human talk you through pricing and all the ways you can customise your own step challenge.

Thank you! Your submission has been received!
Oops! Something went wrong while submitting the form.